Anti-VEGF therapy is an established first-line treatment for visual impairment in DME. However, limited data exist on long-term outcomes after patients return to receiving standard clinical care. The objective of this study was to assess clinical outcomes at 5 years in participants with DME treated with anti-VEGF therapy and to characterize follow-up treatments.

In this multicenter cohort study, researchers evaluated the effects of three different anti-VEGF therapies, (aflibercept, bevacizumab, and ranibizumab) in patients with a visual impairment from DME. Participants had previously taken part in the Protocol T clinical trial, which ran for 2 years and was conducted by the Diabetic Retinopathy Clinical Research (DRCR) Network. Patients were randomly assigned to 1 of the 3 anti-VEGF therapies, used the therapy for 2 years, then followed up at 5 years. Primary outcome measures included visual acuity and central subfield thickness.

Limitations to this study were that results were based on only 68% of the potential cohort and participants who completed the follow-up at 5 years may be different from the full cohort given these patients had better baseline visual acuity than nonparticipants. Additionally, some data may be incomplete given that follow-up and treatment data after 2 years were collected from chart reviews.

The study researchers concluded that mean visual acuity worsened at 2 and 5 years following anti-VEGF therapy and that different treatment strategies and management approaches may be needed to improve long-term outcomes in diabetic macular edema and related visual acuity. 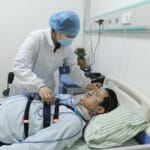 OCT-A Can Find Ocular Changes in Patients with Sleep Apnea