Vessel densities (VD) of the optic nerve head gradually decline in the course of thyroid eye disease (TED), significantly so for patients with moderate-severe disease and those with dysthyroid optic neuropathy (DON), according to research published in Ophthalmic Plastic and Reconstructive Surgery.

The researchers characterized an insignificant increase in the peripapillary-VD (pp-VD) and whole image-VD (wi-VD) between healthy volunteers and patients with Graves’ disease without TED followed by a significant decrease in RPC-VD in different severity grades of the TED (P =.001). Using paired comparisons, the team found that the significant decrease within the Graves’ disease group occurred in the moderate-severe and DON groups (.001≤ P ≤.04).

In a multivariate analysis, the researchers did not observe any significant associations between patient-/disease-related variables (sex, age, smoking, intraocular pressure, clinical activity score, duration of TED, and duration of dysthyroid disease) and the VD.

They found that a lower wi-VD and pp-VD were significantly correlated with the impaired optic nerve functional and structural tests (.001≤ P ≤.009) and that the sensitivity and specificity of wi-VD (81% and 76%) and pp-VD (69% and 71%) for detecting the DON were statistically significant (P <.001).

“Despite an insignificant rise in the wi- and pp-VD from the healthy volunteers to the patients with Graves’ disease without TED, VD showed a declining trend in the course of patients with TED, which was statistically significant in the moderate-severe TED and DON groups,” according to the researchers. 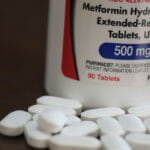 Metformin, Lifestyle Changes Cut Risk for T2DM, But Not CVD