In a retrospective, cross-sectional cohort study, researchers averaged multiple OCT-A images to quantitatively compare retinal vascular features and correlate these metrics to patient best-corrected visual acuity (BCVA) and DR severity. Ultimately, investigators sought to evaluate the efficacy of this averaging method in terms of both quality and outcome severity as compared with the use of single OCT-A images.

At baseline, laterality, gender, and lens status were not significantly different between groups, but mean BCVA was better in healthy eyes.

Investigators then used a multivariate linear regression model, including all OCT-A parameters significantly associated with DR severity, and found that averaging did not result in an increased R2 value (0.82 and 0.77 for single and averaged groups, respectively). After including all potential explanatory variables, none remained associated significantly with DR severity in multivariate analysis with single images. Among averaged images, increased superficial retinal layer superior Early Treatment of Diabetic Retinopathy Study perfusion density was a significant predictor of worse DR severity (coefficient 52.7; P =.026), and a similar outcome for BCVA showed comparably low R2 values (0.42 and 0.47, respectively).

A study limitation was the limited sample size overall as well as a small sample of eyes for each stage of DR severity. Other limitations include the cross-sectional design of the study and its use of only 1 OCT-A system, which limits the potential reproducibility of the investigation.

“Our study is the first to demonstrate the qualitative and quantitative improvement with registered image averaging in eyes with varying degrees of DR severity,” the researchers concluded. “Earlier identification of eyes at significant risk because of lower vascular density and macular ischemia may provide for better individualized management of diabetic retinal disease.” 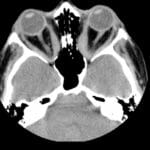 Nerve Block for Supraorbital Neuralgia Effective for Both Diagnosis and Treatment