Ophthalmologists of all levels of grading experience were able to identify neovascularization (NV) in patients with diabetic retinopathy (DR) using swept source optical coherence tomography angiography (OCT-A) as accurately as with fluorescein angiography (FA) after undergoing a brief OCT-A training, researchers found in a study published in the American Journal of Ophthalmology.

Previous studies have indicated that imaging researchers can use swept source OCT-A to identify NV in DR with high sensitivity, but investigators wanted to determine whether this could also be achieved in the clinical setting.

The researchers collated 47 paired swept source OCT-A and FA images from 24 patients with severe non-proliferative diabetic retinopathy (NPDR) or proliferative diabetic retinopathy (PDR) and a high clinical suspicion for the presence of NV. The patients had been imaged with both ultra-widefield FA and OCT-A at the same visit. They determined via consensus-adjudication that NV was present in 36 of the FA images and 35 of the OCT-A images and that there were concordant ground truth grades for the images in all but 1 eye, which demonstrated NV on FA but not OCT-A images.

Residents were more likely to grade the FA incorrectly but OCT-A correctly compared with fellows and attendings (P =.04), who did not show asymmetry in their grading on FA and OCT-A.

Limitations to the study include graders’ inability to access the entire sequence of FA images and that the FA images in the study were cropped to the size of the corresponding 12mm x 12mm OCT-A image, so areas of NV outside that area may have been excluded from the field of view. 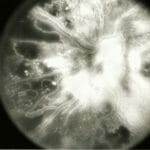