Macular abnormalities can be observed on fundoscopy in some patients before any measurable loss of visual function is noted, according to a study recently published in Clinical Ophthalmology. The researchers speculate that these changes may represent minute, yet-to-be-understood visual changes, or may actually represent an anatomical redundancy and not be associated with any functional change at all.

The  researchers investigated the association between minor macular changes and visual function to offer new clues for the early detection of age-related macular degeneration (AMD).

“During the course of our group’s work to develop novel endpoints for AMD, we noticed that when observed carefully under high magnification, several older subjects’ fundus that were classified as grade 0 on the age-related eye disease study, (AREDS) scale (i.e., normal aging/very low risk) had minimal mottling and textural changes in the macula,” the researchers wrote.

The study examined whether these slight structural changes — such as limited drusen and hyperpigmentation — present in the maculae of “older normal subjects” correlated with losses in visual function. After careful screening, 57 subjects, 60 years and older completed all parts of the study, with two to three follow-up visits. All who were selected showed no signs of retinal diseases and exhibited best visual acuity of 20/25 or sharper.

“We found that none of the visual function tests used in this study found significant difference between the two groups,” the study authors explained. “This paper shows that normal VA and OCT can be seen associated with pathology of macula seen on ophthalmoscope.”

The research proposes the question of whether a redundancy of photoreceptor function exists. They added that further investigations of larger population samples comprise next steps toward a greater understanding for how minor structural anomalies may be connected to more subtle changes in vision.

Some of the authors of this study disclosed a financial relationship with Ora, Inc. 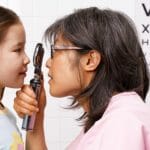