Children exposed to secondhand smoke are more likely to have a thinner peripapillary retinal nerve fiber layer (p-RNFL), which could increase their risk of eventually developing irreversible visual impairment, according to a study in the American Journal of Ophthalmology.

“As the retinal nerve fiber is part of the central nervous system, its thinning may have potentially harmful implications on long-term neurodevelopment, and progressive thinning of p-RNFL from childhood to adulthood may lead to optic neuropathy and glaucoma later in life,” report investigators

Participants for this study were recruited from the ongoing Hong Kong Children Eye Study, which was designed to determine the occurrence and development of childhood eye diseases, including refractive errors, strabismus, amblyopia, and allergic eye diseases, and to identify the environmental and genetic determinants of these ocular disorders.

All participants received comprehensive ophthalmic examinations and p-RNFL thickness was measured by spectral domain optical coherence tomography. The secondhand smoke data was derived from a validated questionnaire, which focused only on their parents’ and other family members’ smoking habits inside the home. Associations between p-RNFL thickness and secondhand smoke exposure status, number of smokers in the family, and quantity of smoking in the family were all determined by multivariate linear regression after adjusting for potential confounders.

Among the possible determinants of p-RNFL, axial length was shown to be a significant factor. Notably, every 1 mm increase in axial length was associated with 1.56 µm of thinning of the global p-RNFL thickness (P <.001).

The authors of the study suggest that these findings further support existing evidence that secondhand smoke is dangerous for children and more strict restrictions should be considered to stop exposure in the home.

“The thinning effect of SHS on the p-RNFL of children was between 1.6 to 4.4 μm, which was comparable with previous studies in adults. Although the long-term implications of RNFL thinning require further longitudinal study, the present findings suggest that toxicity due to secondhand smoke can potentially affect central nervous system development” the researchers say. “This is in line with reported cognitive deficits in children exposed to secondhand smoke.” 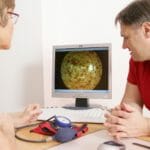