Among patients with chronic serous chorioretinopathy (CSC) who are treated with a reduced dose of verteporfin photodynamic therapy (PDT), a study shows a significant reduction in subfoveal choroidal circulation, according to results published in BMC Ophthalmology.

Although CSC is among the most common retinal diseases, the pathophysiology is still unclear. PDT with verteporfin has been an effective therapy for CSC but complications such as retinal pigment epithelium atrophy or tearing, secondary choroidal neovascularization, and choriocapillaris ischemia can occur. To reduce these complications, several studies have assessed outcomes of efficacy when reducing the dose of PDT.

As the effects of several reduced doses of PDT are still not well understood, a team of investigators in Japan conducted a retrospective study (UMIN Identifier: 000026850) to characterize modifications in choroidal blood flow and thickness, as measured by laser speckle flowgraphy (LSFG), in patients with chronic CSC who were treated with either one-half or one-third the dose of PDT. LSFG was used to measure the best-corrected visual acuity, central retinal thickness, central choroidal thickness, and mean blur rate in the macula and optic nerve head at pretreatment, as well as 2 weeks, 1 month, 3 months, and 6 months post-treatment.

The average mean blur rate in the macular area significantly decreased at every follow-up point for patients treated with one-half dose of PDT; however, such significant decreases were only observed at the 2 week follow-up in the one-third PDT group. 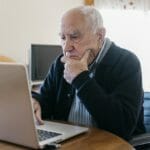