Monthly follow-up examinations should be performed in patients with ocular neovascularization after a central retinal artery occlusion (CRAO) diagnosis, according to research results published in Clinical Ophthalmology.

The currently reported incidence of ocular neovascularization following CRAO is variable — and most studies use institution-based data from large tertiary care centers and may be biased to more severe disease. To avoid this potential bias, the current research made use of a population-based cohort to determine the incidence of ocular neovascularization and associated systemic diseases.

Using data from the Rochester Epidemiology Project, medical records of patients diagnosed with central retinal artery occlusion between 1976 and 2016 in Olmstead County, Minnesota, were identified. Researchers performed a retrospective chart review to confirm diagnosis based on clinical history, ophthalmic exam, and ancillary testing.

A total of 965 unique patient charts were reviewed, with 89 patients confirmed with new CRAO during the study period. Median patient age was 76 (range, 46-100) and 56% of patients were men.

Excluding those with central retinal vein occlusion, 13% of 89 patients developed neovascularization “directly as a result” of CRAO.

Study limitations include those inherent to retrospective research, a lack of standardized follow-up exams, and a lack of generalizability to other patient demographics.

“Due to the ocular morbidity of [neovascular glaucoma], we stress the importance of monthly follow-up examinations for these patients with undilated gonioscopy beginning after their CRAO diagnosis,” according to researchers. “Our data suggest that close monitoring up to 9 months after CRAO may be warranted.”

“Patients with diabetes…should be educated that they are at higher risk for ocular [neovascular] complications,” the report says.. “Future studies may help determine factors that may reduce the [neovascularization] risks.” 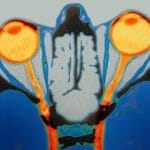 Hallucinations May Be Charles Bonnet Syndrome, Not Early Dementia