Functional and structural changes in the retina, measured by multifocal electroretinogram and swept-source optical coherence tomography (SS-OCT), could possibly play a role in the early detection of in vivo Alzheimer disease (AD) pathologic abnormalities in cognitively normal (CN) patients older than 55 years, according to a study published in JAMA Ophthalmology.

The cross-sectional study looked at the association of retina changes with AD neuroimaging biomarkers in 49 CN individuals at the Seoul National University Hospital in Seoul, South Korea, 25 of whom were women (51.0%) and a mean age of 70.6 years.

The main outcomes and measures used for analysis were structural parameters of the retina, the thickness of the macula and layer-specific thicknesses, including peripapillary retinal nerve fiber layer and ganglion cell-inner plexiform layer measured by SS-OCT. Implicit time and amplitude of rings 1 to 6 measured by mfERG were used to determine functional parameters of the retina.

In addition, the team describe the Aβ+CN group as showing prolonged implicit time compared with the Aβ-CN group, particularly in ring 5 (41.3±4.0 milliseconds vs 38.2±1.3 milliseconds; P =.002). They also correlated AD-related neurodegeneration with the thickness of the ganglion cell-inner plexiform layer only (P =.005). “The model to differentiate the Aβ+CN vs. Aβ-CN groups derived from the results showed 90% accuracy,” the report says.

The study’s limitations include that its design and (relatively) small sample size make it impossible to determine temporal consequences and causal association between retinal alterations and in vivo AD pathologic abnormalities. Next, due to the “rather cumbersome aspects” of mfERG, the wide use of mfERG in clinical practice might be limited. And finally, because of the use of the backward likelihood ratio method and, again, the relatively small sample size, and that only those without eye diseases were included in the study, the findings likely don’t apply to the general population as a whole.

“To our knowledge, this study is the first to investigate the association of in vivo AD pathologic abnormalities with functional changes of the retina as measured by electroretinography, as well as structural changes using SS-OCT in CN older adults,” investigators note. 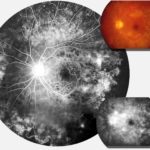