Siluron® 2000 (Fluoron GmbH) is an effective long-term silicone oil tamponade in the treatment of severe vitreoretinopathy, according to a study published in Clinical Ophthalmology.

Siluron 2000 was developed to lower postoperative silicone oil emulsification, a frequent complication that arises with low molecular weight silicone oil, investigators report. To date, no published studies have reported the long-term efficacy and safety of this product. In a single-center retrospective, observational study, researchers based in Canada evaluate the long-term efficacy and safety of Siluron 2000.

The study included 57 eyes of 57 consecutive patients who received pars plana vitrectomy with intravitreal Siluron 2000 between January 2017 and September 2019. Among the study population, there were 51 cases of proliferative vitreoretinopathy and 6 cases of recurrent full thickness macular hole. The median patient age was 63 (age range: 26-89 years), and 65% of patients were men. Average follow-up time was 18 months.

Researchers found that emulsification occurred in 9 patients (15%), and retinal reattachment was obtained in 47 patients (82%). The average time without silicone oil emulsification was 17 months. In cases of residual retinal detachment (RD), 4 eyes (7%) had total RDs and 6 eyes (10%) had inferior RDs with attached macula.

The most common adverse events reported were glaucoma 12 (21%), cataract 11 (19%), and epiretinal membrane 2 (3.5%). The investigators found no association between the duration of Siluron2000 and visual outcomes.

Limitations of the study include the relatively small sample size and the retrospective nature. 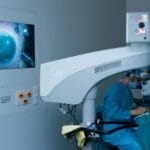