At first presentation, more than 30% of incident geographic atrophy (GA) was within the foveal region, and patients with extrafoveal GA developed it within the fovea after approximately 5 years, according to findings published in JAMA Ophthalmology.

Researchers analyzed data from 4 population-based, cohort studies conducted between 1990 and 2015 to determine the long-term enlargement of GA. The study data included up to 25 years of follow-up and eye examinations at 5-year intervals, and the data were analyzed from January 2019 to November 2020.

The researchers note that their findings on the relationship between GA and loss of VA correspond with those of Chakravarthy et. al, who observed a VA worse than 20/400 in 7.1% of patients with bilateral GA and 71.1% with a VA worse than 20/40 at first presentation in clinic.

Study strengths include its long follow-up time, which allowed researchers to view GA in the context of life expectancy, and its usage of all available imaging to measure GA. Limitations included the low overall number of patients with incidence GA, as well as the long period between visits. 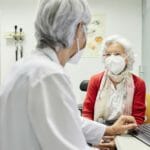