Blue light-filtering intraocular lenses (IOL) do not prevent the onset of wet age-related macular degeneration (AMD), according to a retrospective case-control study, published in Clinical Ophthalmology.

Prior research suggests blue light (400 nm to 500 nm) exposure may be a factor in AMD development, the report explains. In fact, one systematic review of the epidemiological literature on the subject shows a significant link between light exposure and the higher risk of developing AMD, according to investigators.

In this current study, researchers identified a pool of 1790 patients who had been treated with anti-vascular endothelial growth factor (VEGF) inhibitors between 2007 and 2017. Of these, 1663 were reviewed to identify 196 case patients meeting the inclusion criteria: diagnosis and treatment for wet AMD and prior IOL implantation at least 3 years before the diagnosis of wet AMD. Patients for a control group were randomly selected from those who underwent cataract surgery at the investigators’ institution. They were exempt of AMD and paired for the year of surgery, sex, and age at cataract surgery.

While researchers had expected that patients without protection against the blue part of the visible light spectrum would be more likely to develop wet AMD, the data did not support this theory. Further, patients with blue-filtering IOL who subsequently developed wet AMD were first treated almost 1 year prior (mean 5.76 years) to patients without blue light filtering IOL (mean 6.62 years).

“Based on our results, we cannot recommend usage of blue light filtering IOL for the purpose of macular protection,” the research concludes.

Investigators did note some limitations of their study, including its retrospective observational design and that the rationale behind surgeons’ IOL choices wasn’t indicated on patients’ charts. Also, data regarding the severity of dry AMD in the wet AMD group couldn’t be extracted. In addition, macular optical coherence tomography and fundus photography are not routinely performed in preoperative evaluation for cataract surgery in the study’s institution. Further, the >3-year period between cataract surgery and anti-VEGF treatment might not be long enough to see a significant effect of blue light filtration. Also, cases and controls were not matched for smoking history, and a higher proportion of patients smoked in the case group. 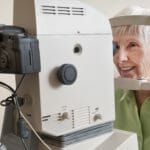