Use of a wide-field digital imaging system is realistic, safe, and useful for conducting universal ocular screening for newborns in an effort to detect ocular abnormalities, according to research results published in the BMC Ophthalmology.

In recent years, multiple studies have advocated for universal eye screening for all newborns. Particular research has found that wide-field digital imaging is a safe, practical possibility compared with examination via binocular indirect ophthalmoscope. Given this history, researchers for the current study sought to examine healthy term newborns to determine both the proportion and types of ocular abnormalities that may have been missed without newborn screening.

The cross-sectional study included 203 newborns (mean age, 1.93±1.49 days) who underwent a complete eye examination. Of these, 69 newborns had an ocular abnormality identified. No significant differences were noted in weight between those with and without ocular abnormalities (mean weight, 2993.63±431.31 g), nor were differences in maternal age noted.

No significant differences were found in terms of sex, race, maternal gravida, birth weight and term, although findings did indicate a larger proportion of newborns delivered via standard vaginal delivery in the group with abnormal ocular findings.

A subgroup analysis was performed on newborns delivered via standard vaginal birth, where episiotomy correlated with more abnormal ocular findings.

Delivery mode was identified via simple logistic regression as an association with retinal hemorrhage in healthy newborns. Those delivered via standard vaginal birth had 3.43 higher odds of having retinal hemorrhage compared with newborns delivered via cesarian section (odds ratio, 3.43; 95% CI, 1.73-6.78). A multiple logistic regression was used to further assess if these factors were independently related to retinal hemorrhages in newborns; after adjustments for covariates, standard vaginal delivery conferred the highest risk factor, nearly 3.5 times higher compared with cesarian delivery.

The study’s limitations include the relatively small sample size, which reduced the probability of detecting rarer abnormalities, as well as the single center design. 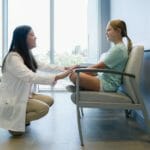 Many At-Risk Children Are Not Receiving Clinical Services