Using epithelial thickness maps in preoperative evaluations, clinicians are able to identify more candidates for corneal refractive surgery and more narrowly target the ideal surgery for a considerable percentage of patients, according to a study published in the American Journal of Ophthalmology.

Corneal epithelial thickness pattern mapping is often used in the assessment of early ectasia — a factor that affects eligibility for refractive surgery. “However, little attention has been directed at correctly characterizing seemingly abnormal corneas as normal,” according to an investigation.

Clinicians at the Cole Eye Institute in Cleveland, Ohio, evaluated 100 consecutive patients being screened for LASIK, small incision lenticule extraction (SMILE), or photorefractive keratectomy (PRK). Participants, (mean age 33±9 years, range 18-60 years), were eligible for surgery based on baseline refraction, and underwent a clinical examination including slit lamp and dilated fundus examinations, as well as Scheimpflug tomography and anterior segment optical coherence tomography (AS-OCT) imaging. The physicians, masked to patient identity, made decisions regarding surgery based on anonymized screen captures of exam data and the Scheimpflug test.

Then, clinician examiners were presented with the epithelial mapping data, and considered whether thickness patterns changed their initial recommendation. Central or inferior epithelial thinning were more caution-producing for refractive procedures. Conversely, patterns of focal thinning located near steepening of the anterior curvature addressed prior concerns. After this first evaluation, 82% were judged good candidates for 1 of the 3 procedures, but for 18% refractive surgery was not believed a viable option.

Upon inspecting thickness pattern mapping, recommendations changed for 16% of patients; with 10% (between 9 and 10) previously ineligible now screened “in” for the refractive surgery and 6% (5 to 7) who were thought good candidates being screened “out.” Further, a ranking of most to least promising of the 3 procedures for each individual that evaluators recorded before looking at epithelial patterns later changed for 25% of participants.

Previous studies have shown differences in biomechanical impact from LASIK, SMILE, and PRK. PRK is thought to be the least destabilizing of the procedures. Also, prior work has shown that LASIK was demonstrated successful after patients were screened “in” due to epithelial thickness patterns, even though anterior curvature topography was previously uncertain.

Participants in the current study were initially screened between February 2020 and September 2020. The subjective nature of this analysis represents a limitation, as well as that follow-up to appraise actual surgery outcomes was not part of the design. Alternatively, looking at changes in eligibility determination may eliminate confounding due to baseline patterns of practice and decisions based on the specific procedures available to surgeons.

It is notable that independent decisions of the 2 clinicians were strongly similar (range P =.6 to P =1.0). Epithelial maps supplement Scheimpflug testing in the typical screening process at Cole Eye Institute, as well as looking at age, refractive error, and pachymetry. 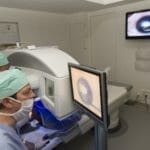