In patients older than 40 years, small incision lenticule extraction (SMILE) refractive procedures may have significantly lower efficacy and safety indexes, poorer astigmatic outcomes, and a tendency toward undercorrection than in patients younger than 35, according to a study published in the British Journal of Ophthalmology.

The retrospective, consecutive, comparative study looked at the influence of a person’s age on refractive outcomes at the time of myopic SMILE. Researchers compared results of 102 matched eyes of 53 patients divided into 2 groups by age (those 35 years and younger, and those 40 years and older), preoperatively and 1 and 6 months postoperatively. Efficacy, safety, predictability, and astigmatic changes were the main outcome measures, taken by vector analysis.

The researchers say SMILE is an “efficient, safe, stable, and relatively predictable refractive surgery solution for the management of myopia with or without mild to moderate astigmatism” for patients older than over 40. However, they caution that surgeons might see worse refractive outcomes in older patients than in younger patients.

“We hypothesize that the increased corneal stroma stiffness in the aged group modifies the post-SMILE corneal stroma remodeling capacity, thus affecting the SMILE refractive and visual response,” the researchers conclude.

The study’s limitations include its retrospective design and possible paired date bias from both patient’s eyes being included in the study (but they did so, they report, because they wanted to expand the study’s sample size). “Nevertheless, further studies with larger samples and without this potential bias are required in order to confirm these outcomes.” 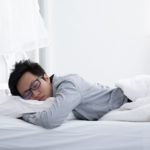