Higher mean treated intraocular pressure (IOP) is associated with higher rates of visual field loss, according to researchers at the Johns Hopkins University School of Medicine. Further, the effects of mean treated IOP on visual field loss vary by disease stage, they report in a Journal of Glaucoma publication.

Previous studies have found that higher mean IOP, maximum (peak) IOP, and SD of IOP are linked with higher rates of worsening glaucoma. However, literature on the effects of IOP on visual field worsening is unclear. To examine the relationship between mean treated IOP and visual field worsening, and understand how this relationship is affected by glaucoma severity and IOP range, investigators recruited 869 patients (1446 eyes) treated for glaucoma. Patients had at least 5 longitudinal reliable visual field tests, and had their IOP measurements taken.

The study’s authors note several limitations to their work, including using visual field worsening as the primary outcome measure. Second, due to the lower prevalence of moderate and advanced disease in the study’s population, they couldn’t separate these 2 groups due to a lack of statistical power. Lastly, these results are likely not generalizable to an untreated group of patients.

Disclosure: One of the study’s authors declared affiliations with biotech, pharmaceutical, and/or device companies. Please see the original reference for a full list of authors’ disclosures. 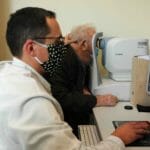