Glaucoma patients showed motor disorder when grasping for objects only when they did not have time to explore their environments, according to a new study in the Journal of Glaucoma.1 Historically, research has shown consistent deficits in the motor performance of patients with visual impairment, such as those with glaucoma, according to the researchers. However, these investigations presented participants with a target object at the very moment they had to grasp it, the new study suggests.1 This is not true to daily life, where people have time to look at an object before grasping it.1 The investigators believe that those prior results were due to participants not being given enough time to analyze the environment before motor production, rather than the result of motor system deficits themselves.1

The kinematics of each participant’s reach-and-grasp motion was compared in 2 different conditions: one in which patients saw the object only at the moment when they had to grasp it, which imposed temporal constraints for visually exploring their environment and one in which they had time to look at the object before grasping it.1

Alongside the 16 patients with a glaucoma diagnosis, researchers also included 14 age-matched volunteers with normal visual acuity and a young adult group of 18 healthy students, to dissociate the effect of aging from the effect of the pathology.1

Participants sat at a table and placed their thumb and index finger close to a starting point near the edge. Researchers arranged 5 cylinders (all the same color) in a semicircle in front of them.In front of the table, a curved screen displayed the different steps for each trial.1

In the task with a temporal constraint, 5 colored cylinders were displayed on the screen in different locations and a loudspeaker gave the name of a color. As soon as they recognized the location of the specific color, the participants were asked to reach-and-grasp the corresponding cylinder on the table as quickly and accurately as they could.

The process was the same for the task without a constraint, except participants were asked to reach-and-grasp only after they heard an auditory clue.

A magnetic tracking system recorded the participants’ movements in an x, y, and z coordinates system.

Glaucoma patients showed a motor deficit only when they hadn’t time to explore the visual scene. The deficit was specific to the reach phase of motion. The same research team found similar results in patients with age-related macular degeneration (AMD) 2 years earlier.2

Researchers suggest the motor abnormalities in this phase observed in glaucoma patients in previous studies might stem from the patients’ difficulty identifying objects, rather than from visuomotor deficits.1 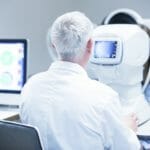 Corneal Hysteresis May Provide Another Metric for Prediction of Glaucoma Progression