Baseline glaucoma severity is not significantly associated with longitudinal rates of minimum rim width (MRW), peripapillary retinal nerve fiber layer (RNFL), or macular ganglion cell layer (GCL) thickness changes according to a prospective cohort study, published in the American Journal of Ophthalmology. However, the report shows that GCL thickness was “able to statistically contrast the rate of change between healthy [patients] and glaucoma patients throughout the disease spectrum.”

This study was carried out at 2 centers in Nova Scotia, Canada. Patients (n = 132) with glaucoma and healthy controls (n = 57) were assessed by optical coherence tomography (OCT) at least 5 times at 6-month intervals. The rate of change in MRW, RNFL, and GCL thickness were estimated and the change in these parameters was used to predict glaucoma severity.

This study may have been limited due to underrepresentation of patients with severe disease at baseline (9.8% had baseline visual field of -12 dB or worse). 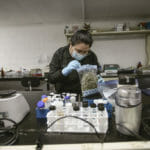