Laser goniopuncture can effectively rescue eyes following failed deep sclerotomy, but there are several factors that might contribute to its success or failure, according to research results published in the British Journal of Ophthalmology.

Consecutive patients who underwent laser goniopuncture after deep sclerectomy at 2 institutions in the United Kingdom between 2014 and 2020 were included in the current study. The primary study outcome was the success rate of deep sclerectomy following laser goniopuncture; secondary outcomes included procedure incidence and prevalence, prognostic factors for the outcome after the procedure, intraocular pressure (IOP), best-corrected visual acuity (BCVA), and the number of medications required during follow-up, in addition to the occurrence of complications — specifically, iris incarceration — following laser goniopuncture procedures.

Among the eyes that underwent laser goniopuncture, 42 had no available data following the procedure; a total of 900 eyes were included in the study. Median follow-up after the procedure was 43 months (interquartile range [IQR], 18 to 81 months).

Only 39 eyes — 4.3% of patients — were taking glaucoma medications before laser goniopuncture; the number of medications significantly increased in the postprocedure period while remaining as low as less than 0.5 medications per eye.

Postprocedure BCVA did not change significantly until 1-year follow-up; the reduction was then mild, which was statistically — but not clinically — significant.

Results of a multivariable Cox regression analysis showed that later laser goniopuncture was associated with a decreased risk of iris incarceration (for 1 month increase, hazard ratio [HR], 0.936; 95% CI, 0.884-0.991). In 24 cases, iris incarceration was treated successfully with Argon iridoplasty, while 2 eyes required surgical iris repositioning. In 2 eyes, IOP was satisfactory with only topical treatment, while another 2 eyes underwent no further intervention due to low IOP. Ultimately, 6 eyes underwent further glaucoma surgery after a median of 5.5 months (IQR, 3.3-7.0 months).

Study limitations include the retrospective nature of the research, as well as the irregular visit intervals and the number of patients lost to follow-up, a lack of a control group, potentially missed diagnoses of limited and subclinical iris incarceration, and an inability to determine whether complications were “truly caused” by laser goniopuncture.

“This study identifies several factors associated with [laser goniopuncture] outcomes, knowledge of which may help the clinician anticipate…efficacy and counsel the patient accordingly,” the study says. “Despite a good safety profile, [laser goniopuncture] is not a risk-free procedure and may lead to serious complications.” 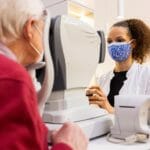