Trabectome surgery, combined with phacoemulsification, is effective in mild to moderate primary open-angle glaucoma patients, no matter the blood filling patterns in Schlemm’s canal (SC) before the trabecular meshwork (TM) ablation, according to a study in the Journal of Glaucoma.

After dividing patients into these 3 groups, the team compared surgical outcomes, including intraocular pressures (IOP), percent reduction in IOP, surgical success rate, and number of glaucoma medications, with success defined as an IOP of 15 mm Hg or lower and a more than 20% reduction in IOP with or without glaucoma medication. They also considered it successful if the patient needed no follow-up glaucoma surgery.

“Although the blood filling patterns in Schlemm’s canal before trabecular meshwork ablation are not a plausible outcome marker for trabectome surgery, this study suggests that a malfunctioning aqueous outflow pathway distal to Schlemm’s canal may be recanalized after trabecular meshwork ablation by trabectome surgery,” according to the researchers.

Trabectome surgery, combined with phacoemulsification, is an effective procedure for patients with mild to moderate POAG, regardless of the blood-filling patterns in Schlemm’s canal before trabecular meshwork ablation, the study explains. 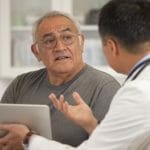