At the moment, 2 classes of glaucoma surgeries have been gaining favor among cataract and glaucoma surgeons: gonioscopy-assisted transluminal trabeculotomy (GATT) and ab-interno trabeculotomy (AIT). These procedures are quick to perform, reimburse well, and appear modestly effective at lowering intraocular pressure (IOP). Both GATT and AIT work through similar mechanisms: GATT involves tearing through the trabecular meshwork whereas with AIT a strip of trabecular meshwork is removed. However, mounting evidence suggests that we should be sparing, rather than tearing, the trabecular meshwork.

Before addressing the reasons we should consider protecting the trabecular meshwork, it is helpful to understand why we would wish to destroy this tissue in the first place. It is commonly taught and widely believed that resistance to outflow at the juxtacanalicular trabecular meshwork (JCT) is the primary cause of elevated IOP in open angle glaucoma. This was first proposed in the late 19th century.1 Apparent proof of this was provided almost a century later by W. Morton Grant, MD.2 However, we now know this work failed to take into account multiple important physiologic components affecting IOP. Dr Grant himself later concluded that there is actually little resistance in the trabecular meshwork itself.3-9 Despite these findings, the concept that the primary problem in glaucoma was from resistance to flow at the trabecular meshwork has ossified into near dogma among ophthalmologists.

If blockages in the trabecular meshwork are essentially obstructing the drainage of fluid within the eye, then it makes intuitive sense to remove what is blocking the exit. The available literature suggests that De Vincentiis was the first to treat glaucoma by incising the trabecular meshwork.10 This technique was improved upon by Otto Barkan who may be considered the father of goniotomy as he “developed a surgical contact glass which enable[d] him to operate on Schlemm’s canal with this region in full view.”10 (You thought gonioscopic surgery was a modern development, didn’t you?) His technique was essentially a grandparent of what we refer to today as minimally invasive glaucoma surgery (MIGS).

The second grandparent, “nylon filament trabeculotomy” described a procedure in which a suture was threaded into Schlemm’s canal and then ripped through the trabecular meshwork.11 With this technique goniotomy was no longer limited to just the nasal quadrant. These precursors combined with a small incision approach led to what is now known as GATT, first described in 2014, as a small incision MIGS modification of nylon filament trabeculotomy using the gonioscopic approach developed by Barkan.12

There is a problem, however, with nylon filament trabeculotomy and GATT (both of which fall under the category of “suture trabeculotomy”). Goniotomy in adults was essentially abandoned in the early 20th century due to inconsistent IOP lowering.13 As the trabecular leaflets are still present after suture trabeculotomy there are a number of mechanisms by which the IOP lowering effect may be limited.14 With each ocular pulse these leaflets may be forced against the posterior wall of Schlemm’s canal potentially obstructing collector channel entrances. Additionally, with time these leaflets may scar down resulting in a permanent obstruction of the conventional aqueous humor outflow (AHO) system.15 Both of these processes hold the potential to essentially undo the effect of the surgery.

To address the limitations of suture trabeculotomy, a new surgery, ab-interno trabeculectomy (AIT), was introduced in 2004. The first iteration of this, Trabectome, used a specialized handpiece with a plasma tip to remove (rather than just tear) a strip of trabecular meshwork from the eye. In theory this should have made it much harder for the cicatrization of the remaining trabecular leaflets to occur, resulting in a more sustained IOP reduction than could be expected with suture trabeculotomy.

If Grant’s initial conclusion that the majority of the resistance to outflow was at the trabecular meshwork, then removing the trabecular meshwork should have resulted in IOPs near the episcleral venous pressure (EVP, 7 to 8 mm Hg). However, AIT tended to lower the IOP only into the mid-to-high teens, which is more than twice that of the EVP.16 Why wasn’t AIT working as intended?

Not a Filter, but a Pump

We now know that at physiologic pressures, more than half of the resistance to outflow is located “distal to” (beyond) the trabecular meshwork.17 Assuming the outflow system is just a series of restrictions to flow, removing the trabecular meshwork is simply insufficient to lower IOP below the teens. However, even this understanding of the outflow system is grossly simplified and outdated.

Recent discoveries have demonstrated that the conventional outflow system is anything but passive. Indeed, rather than just blocking outflow, the trabecular meshwork acts as a critical component of a complex system of active pumping of aqueous fluid.18 To clarify, modern understanding suggests that the trabecular meshwork functions as a piston that pushes aqueous fluid out of Schlemm’s canal into even smaller tubes (the collector channels). If this piston is destroyed, so is the pump. It doesn’t take an engineer to understand that if a pump is malfunctioning the solution is to fix the pump, not destroy it. Yet, destroying the pump is exactly what is being done with GATT and AIT.

If your home is too warm on a summer day and your air conditioner is not keeping up would you “solve” this problem by opening up your windows, smashing the air conditioner, and ripping the control box off of the wall? Of course not. Yet, this is what we are essentially doing to the complex and active system of IOP control in the eye when either GATT or AIT are performed. Granted, if the system is so irreversibly broken that it cannot be fixed then you may have no other option than to just open the windows. Likewise, there are times when there may be no other reasonable option to “fix” or restore function to the eye’s drainage system. 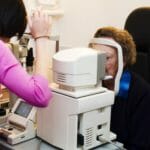