Laser peripheral iridotomy (LPI) increases the angle opening and flattens the iris in patients suspected of having primary angle closure, according to a China-based study published in Frontiers in Medicine.

Among iris parameters and ciliary body parameters, the iris thickness at 2000 µm (IT2000), iris curvature (IC), and trabecular-ciliary process distance (ICPD) were reduced after LPI. Researchers developed an equation to predict the width of the angle after LPI. The equation consisted of four parameters: anterior chamber depth (ACD), iris thickness at 750 µm from the scleral spur (IT750), AOD750, and lens vault (LV). This equation explained 42.7% of the variability in the angle opening indicator AOD750 after LPI. According to the findings, in the plateau iris configuration subgroup, the accuracy of the prediction equation reached the highest maximum of 68.6%.

Researchers note several limitations to their study, including using AOD750 as the standard, inter-observer variability regarding gonioscopy, basing the equation on univariable and multivariable linear regression equations, and that nonstandardized UBM gain parameters may affect the accuracy, reproducibility, and further analysis of the results. 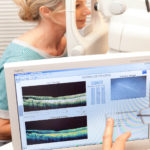