The use of an elevation training mask (ETM) can heighten intraocular pressure (IOP) during low-intensity endurance training, according to findings published in the Journal of Glaucoma.

Researchers performed a controlled crossover study to measure the effects of ETMs on IOP and heart rate. The participants included 16 physically active young adults (23.9 years old ± 2.9 years) who cycled for 30 minutes with and without an ETM on 2 different days. IOP was measured using a rebound tonometer at baseline, after a 5-minute warmup, 5 times during cycling, and 2 times during recovery.

The study found that IOP was significantly impacted by the use of an ETM (P <.001, ηp²=0.66), with an incremental rise during exercise, whereas in the control condition, researchers observed an IOP-lowering effect (P <.001, ηp²=0.41).

Because the use of an ETM restricts airflow, researchers conclude that low-intensity endurance exercise causes an increase in IOP and, therefore, ETMs should be avoided for those with, or at risk for, glaucoma.

The 16 study participants consisted of 8 women and 8 men who were free of systemic and ocular pathology. They were asked to abstain from alcohol and caffeine consumption for 12 hours prior to visiting the laboratory, and strenuous exercise for 48 hours prior to their visit.

During the study, participants cycled for 30 minutes at 10% of maximal power production (Pmax), which was determined by a process consisting of a warmup, rest period, and subsequent sprints measuring the force-velocity relationship. Researchers measured IOP and heart rate for the 2 sessions per participant, which were identical except for the use or not of an ETM. Recording of heart rate was divided into 5 blocks of 6 minutes throughout the exercise session, and it was monitored for 10 minutes afterward in 2 blocks of 5 minutes.

The researchers explained that the results of the study, which found that the use of an ETM raises IOP during low-intensity exercise, were expected and are in line with past findings. The team added that some details, such as time of IOP levels to return to baseline, should be studied further in the future.

The study’s limitations include its small sample size, the nature of the task, which involved cycling for 30 minutes at 10% of Pmax. The researchers conclude that, due to the task’s specificity and the good physical health of its participants, the findings should not be generalized to all populations and conditions. 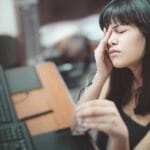