While glaucoma drainage devices (GDD) are widely used for the management of glaucoma, not every device fits well into every eye. Surgeons must take special precautions to ensure the GDD’s plates do not contact the optic nerve. The Freedman-Margeta calculator, which helps surgeons calculate modifications in these circumstances, is now available as a smartphone app, the GDD Calculator. The app’s development is described in Ophthalmology Glaucoma.

While creating the app, the researchers also developed 2 tables of minimum GDD- and quadrant-specific axial lengths (AL) for safe implantation 8 mm from the limbus and 2 mm from the optic nerve. The first table provides details for pediatric patients up to 2 years old, and the other is for surgery on any older patients.

One of the minds behind the calculator, Sharon F. Freedman, MD,  a professor of ophthalmology and pediatrics and chief of the pediatric division at the Duke Eye Center, explains, about the devices, that “while they are supposedly made to allow the surgeon to sew the plate to the sclera more easily (at a recommended distance of 6 mm to 8 mm from the limbus), the unsuspecting surgeon, if placing the device a little further back, might not realize how close that plate is to the optic nerve, especially in shorter eyes, or in those where the GDD plate is going to be placed inferior nasal rather than the usual preferred superior temporal quadrant for first GDD implants.”

The researchers described 2 cases in which surgeons used the app to successfully place an Ahmed FP7 GDD in patients while remaining 2 mm from the optic nerve. In the first patient’s case, preoperative valuation demonstrated an AL of 20.70 mm and white-to-white of 12.19 mm. With the plan of placing the GDD 8 mm from the limbus, the GDD Calculator app was used to determine that the posterior edge of the GDD plate had to be trimmed by at least 2.3 mm. In the second case, AL and white-to-white measurements were 17.60 mm and 11.31 mm, respectively. The researchers used the app to determine that the surgeon could place the GDD by trimming the posterior edge of the GDD plate by at least 4.7 mm and placing the plate 6 mm from the limbus.

“I think any surgeon who placed GDDs in pediatric patients and in enough adults to encounter those adults with shorter-than-average eyes from time to time will benefit from this calculator and app,” Dr Freedman says. 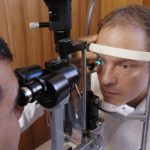