After a mean follow-up time of 3.9 years and 6.4 SD-OCT evaluations, researchers report the average MRW rate of change was -2.33 μm per year.

This study may have been limited by including patients using differing glaucoma treatments. It was not possible to investigate the impact of treatment on CH changes in time.

The study authors explain that lower CH was associated with a faster loss of the neuroretinal rim among patients with glaucoma and may be a marker for disease progression. The rate of loss was more prevalent in the nasal sector of the optic disc.

Disclosure: One study author declared affiliations with the biotech, pharmaceutical, and/or device companies. . Please refer to the original article for a full list of disclosures. 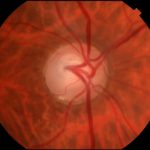