Patients with glaucoma are often unaware of the disease’s impact on their vision and may continue driving while visually impaired, according to investigators. However, the relationship between visual field loss (VFL) and driving ability isn’t clear. Researchers from Sweden used a driving simulator to assess driving ability, concluding that the severity of glaucoma predicts driver safety in most cases, but that drivers should still be assessed on an individual basis.

Researchers compared performance and safety data from traffic-simulator tests for 104 participants whose licenses were revoked due to glaucoma-related VFL with data from 83 individuals without visual deficits. Participants with glaucoma who regained their licenses after a successful simulator test were then followed in a national accident database. Participants passed the test in 71% of the cases. The investigating team found that, in general, younger patients (those in the 35 years to 59 years and 60 years to 64 years age groups)  performed better on the driving simulator than the older groups. Researchers didn’t note any significant differences in safety or performance measures between the groups.

Compared with glaucoma participants who passed the assessment, those who failed the simulation experienced more collisions, more critical “failed to give way” incidents, longer time headways (calculated as the distance to different moving objects divided by the experimental vehicle speed), and longer reaction times. Those who did not pass also had a greater extent of central visual field loss.

According to researchers, none of the study participants who regained a license were involved in a motor vehicle accident during the follow-up period after the simulator test. The team noted that glaucoma patients with severe visual field loss may still drive safely, underscoring the need for individual assessments for licensing purposes.

On-road testing by a certified driving examiner is the preferred standard for assessing driver ability. However, driving simulators can be a useful secondary evaluation method, according to the findings published in Acta Ophthalmologica.

There were some limitations of the study, including that the control group was not sex-matched with the study group and that sharp turns couldn’t be assessed because of simulator-induced “motion sickness.” The control group’s driving abilities were not assessed, so it’s uncertain if all controls passed the test. In addition, head and ocular movements weren’t recorded and therefore not evaluated. Fifth, since glaucoma is a progressive disease, researchers concede that participants may have developed more VFL between the visual field examination and the simulator test. Lastly, the high cost of the test might have affected the selection of participants. 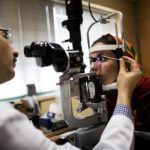