Glaucoma hampers reading performance even for patients with preserved central vision, according to a new study in the Journal of Glaucoma.

Researchers carried out a cross-sectional, prospective interventional study on 67 patients drawn from the Department of Ophthalmology at the Federal University of São Paulo: 35 patients with open angle glaucoma and 32 healthy patients included as a control group. Each participant had a best-corrected visual acuity better than 0.4 logMAR in both eyes and to be fluent in speaking, writing and reading Portuguese. Patients who had any other ocular comorbidities were excluded, as were those below the age of 18 and people with corneal or retinal diseases and dyslexia.

Patients were asked to read sentences from a Portuguese version of the Minnesota Low Vision Reading Test (MNREAD-P), reading aloud as quickly and accurately as possible. Researchers noted their reading speed, quantified as words per minute.

Researchers chose to study reading speed to make it easier to compare their work with earlier investigations. “Our results are in agreement with previous work showing patients with glaucoma have worse reading speed compared to controls but are particularly interesting given the study was restricted to patients with preserved central visual acuity,” the study says.

The study was limited in that, although there were no significant differences in comorbidities or visual acuity between the glaucoma and control groups, other confounders might have influenced the results. Also, the MNREAD-P test cannot measure sustained reading, which might be a better reflection of real-world reading behavior. 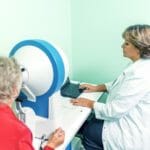