Reoperative dexmedetomidine produced a significant drop in intraocular pressure (IOP) in patients with glaucoma within 15 minutes of administration with no adverse side effects, making it a favorable alternative to mannitol, according to a small pilot study published in the Journal of Glaucoma.

Intravenous (IV) mannitol can decrease IOP by about 34% from baseline, the study explains. However, the use of IV mannitol can be challenging. Because it’s an osmotic diuretic, problems can include fluid overload and how that affects patients with comorbidities; slow onset of action; urgency and increased frequency of urination; and electrolyte imbalance, particularly in patients of advanced age.

In a prospective interventional case series, researchers investigated the use of dexmedetomidine, a highly selective α-2 adrenergic that is used widely for its sedative and analgesic effects. It also is used as a premedication in ophthalmic surgery because of its IOP-lowering benefits. This medication is especially used during general anesthesia in the management of open globe injuries.

The advantages of using dexmedetomidine include the quick, predictable onset of lower IOP, conscious sedation, decreased anxiety, decreased tachycardia, no urinary urgency, and no significant side effects on the cardiovascular system, according to researchers.

Since measuring IOP in the operated eye after surgery wouldn’t be possible, the nonsurgical eye IOP was chosen for the analysis. The mean pre-dexmedetomidine IOP of the nonsurgical eye was 31.5± 5.6mmHg; the mean number of preoperative antiglaucoma medications was 4.3 ±1.3 (range, 2 to 6); and 10 of them were on oral acetazolamide.

During the study, IV dexmedetomidine as premedication (dose of 0.6 μg/kg) produced a significant drop in IOP by 33%, 15 minutes after the premedication. The effect lasted 2 hours after premedication (a 17% drop). Investigators observed a rebound effect with levels reaching close to baseline at the 2-hour mark, reinforcing the drug’s known 2-hour half-life. Dexmedetomidine’s effect on diastolic blood pressure was minimal and there was no significant change in heart rate during the study. There was a statistically significant drop in systolic blood pressure at 15 minutes and 2 hours after administration, but this change was not clinically significant (15 mm Hg to 18 mm Hg decrease and systolic blood pressure was maintained at a mean of 125 mm Hg to 127 mm Hg). None of the patients experienced any medication-related adverse effects, including bradycardia or hypotension, and none required rescue medication. All were discharged on the same day.

While several systemic contraindications are common for both mannitol and dexmedetomidine, some of these conditions could be controlled with dexmedetomidine premedication, whereas mannitol would be contraindicated. For example, in type 2 diabetes mellitus, resting tachycardia and supine hypertension are common due to autonomic neuropathy. These patients would benefit from dexmedetomidine premedication, as would those with anxiety disorders and stage 1 hypertension needing oral calcigard before surgery.

The study’s authors acknowledged several limitations to this study. First, there was no head-on comparison with IV mannitol. To compare with IV mannitol as a control group, the sample size needed would be 350 eyes. Before undertaking a study of that size, the team wanted a “proof of concept” first. A comparison with a placebo control group also could’ve been done, but institutional protocol would not allow the investigators to perform glaucoma surgery without preoperative IOP control.

Disclosure: One of the study authors declared affiliations with relevant device manufacturers. Please see the original reference for a full list of disclosures. 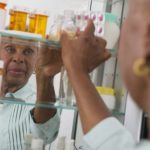