Nonpenetrating deep sclerectomy (NPDS) has been performed since the 1990s using various techniques to maintain the aqueous decompression space, such as collagen-based and autologous implants. However, increased expense and the possibility of fibrosis with implants have been reported. A 1-year prospective investigation follows up on the initial 3-month trial that introduced a novel step known as sub-flap Ahmed’s suture, and demonstrates outcomes of deep sclerectomy were enhanced by 30%, as reported in Eye.

Sub-flap mattress sutures are applied with a 10/0 nylon nonabsorbable monofilament that may cause less unfavorable cell response. It is placed “under and reaching beyond the edges of the superficial scleral flap,” acting as a “hinge” to improve intraocular pressure (IOP) reduction. Ahmed’s suture is a low-cost addition to NPDS that elevates the proximal superficial flap to lower stress on trabeculo-Descemet’s membrane and allow better outflow, the study explains. Investigators evaluated 2 randomized cohorts comparable in age, sex, preoperative IOP, and baseline medications; 52 eyes underwent surgery including the added suture, and 51 eyes received conventional NPDS.

Fewer additional IOP-lowering interventions were needed by those undergoing deep sclerectomy including Ahmed’s suture. In the modified surgery cohort, 12% needed goniopuncture and 4% required needling, as well as an average of 0.2 added post-op medications, compared with the conventional procedure group, for whom 18% underwent goniopuncture, 12% needling, and 0.5 medications. Complications for both sets were “negligible,” and the technique has proved safe, according to the analysis.

Preoperative mean age of the modified deep sclerectomy cohort was 38.1±13.3 years, compared with 38.4±15.0 years in the conventional surgery group. The relatively short follow-up period was a limitation of the study, as was exclusion of statistical analysis by glaucoma severity. Notably, the trial demonstrated success in juvenile-onset glaucoma, who often present to clinics with more advanced disease. 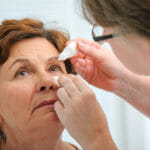