Currently, the pathogenesis of obstructive MGDis incompletely understood. To rectify this, researchers sought to investigate disease pathogenesis using both mouse and human samples with various types of ocular surface inflammation, including eyelid inflammation, MGD, and blepharitis.

An allergic eye disease model was constructed to determine whether aggNETs occlude meibomian gland ducts and impair function. After immunization and 7 days of ocular surface challenge, C57BL/6 wild-type mice were euthanized for examination. Abundant ocular discharge, eyelid edema, conjunctiva redness, and enlarged meibomian gland orifices with plugs were all present. The same experiment was repeated in PADI4-/- mice, and results demonstrated a “significantly less severe” ocular allergic clinical response. According to researchers, the results of these mouse experiments indicate that during allergic inflammatory reactions, the migration of neutrophils to the ocular surface leads to the formation of “a large amount” of aggNETs.

Further histological evaluation of the meibomian gland plugs was conducted. Investigators searched for aggNETs in these ducts, and in wild-type mice, found colocalization of NE with DNA present in both the lumen of the duct and surrounding glandular tissues.

In the human samples, researchers evaluated ocular discharge from patients with eyelid inflammation. In patients with blepharitis, colocalization of NET-markers, NE, myeloperoxidase, and citrullinate histone3 with extracellular DNA fibers was noted; similar results were found in samples with chalazion and trichiasis. According to investigators, these findings demonstrate that aggNETs plug both meibomian gland ducts and orifices.

Finally, the researchers analyzed eye tear fluid from both patients with MGD and “normal” patients for the presence of mediators that allow neutrophil chemo-attraction and activation. In patients with MGD, anaphylatoxin C5a and chemokine interleukin (IL)-8 were increased, indicative of “robust activation” of the complement system on ocular surfaces. Other inflammatory cytokines — IL-6, IL-18, MCP-1/CCL2, and MIG/CXCL9 — were also increased in these patients.

“Obstructive MGD is the leading cause for evaporative dry eye disease due to the lack of secreted lipids that prevent evaporation of the aqueous tear film,” the study says. “MGD facilitates chronic inflammatory processes in the eye, leads to fibrosis around the eyelid margin, and ultimately results in the destruction of the meibomian glands.”

“These data [from the current study] indicate that interventions that limit aggNET formation, such as PADI4 inhibitors, or resolve aggNETs, such as DNase1/1L3, are candidates for treatment,” according to the research. 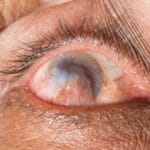