Currently, acyclovir is the most common treatment for ocular herpes keratitis; however, emerging resistance to the drug due to thymidine kinase gene mutations in the HSV-1 has necessitated the need for new therapeutics directed to a different viral protein.

One potential and novel target is HSV-1 processivity factor protein UL42, essential to bind and tether HSV-1 polymerase (UL30) to the correct template, enabling continuous viral DNA synthesis. As such, a team of researchers reported on the construction of a stapled peptide that structurally mimics the UL30 C-terminus and demonstrates its ability to block UL42-dependent processive DNA synthesis in vitro.

Using both primate and human epithelial cells, researchers constructed a series of peptides based on the crystal structure of the C-terminus of the HSV-1 polymerase, using hydrocarbon staples to retain the alpha-helical conformation. Cells were seeded in a 48-well plate in a 300 µL growth medium for 1 hour. Cells were washed to remove unabsorbed virus and treated with S-pep7B at varying dilutions. At 72-hours post-treatment, researchers determined virus titers via standard plaque reduction assays.

Investigators found that UL30 stapled peptides demonstrate a “very high probability” of functioning as inhibitors of processive DNA synthesis required to contact the UL42 target protein. The most favorable stapled peptide that researchers identified was S-pep7; researchers chose to incorporate alterations of the N-terminus to potentially enhance cellular uptake. Each of these modified peptides (S-pep7A and S-pep7B) demonstrated increased antiviral potency against HSV-1.

“We have shown that a stapled peptide, designed in conformity to the alpha-helix of the C-terminus of HSV-1 DNA polymerase can block infection in human primary corneal epithelial cells by specifically targeting the viral processivity factor,” the researchers concluded. “This unique and specific antiviral mechanism demonstrated by these stapled peptides provides the potential for developing a new drug to treat human ocular herpes keratitis, especially in cases where the medical need is unmet due to acyclovir resistance.” 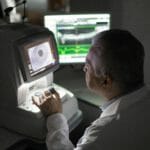