Ocular surface alterations in aniridia-associated keratopathy (AAK) stem from the primary dysfunction and gradual breakdown of the limbal stem cell niche due to PAX6-related effects, according to research results published in The Ocular Surface.

Currently, the pathophysiology of AAK and the mechanisms that cause PAX6 mutations to result in AAK are controversial, the study explains.

Researchers reported on structural and molecular alterations present in the human limbal niche of a 16-year-old girl with congenital aniridia, AAK, and secondary glaucoma with a “blind and painful” left eye requiring enucleation due to uncontrolled intraocular pressure IOP and lens luxation.

In situ morphological and immunohistochemical data were supplemented by mRNA expression studies undertaken on limbal epithelial cells cultivated from limbal biopsies both of this patient and of other patients with aniridia.

The primary patient presented with painful buphthalmia due to secondary aniridia-related glaucoma, congenital aniridia, complete loss of corneal transparency with corneal vascularization, LESC in the superior half, dry eye syndrome, and a subluxated cataractous lens in the left eye. In the right eye, corneal vascularization involved 360 ˚ of the limbus.

AAK diagnosis was made based on classical clinical features: irregular corneal epithelium, recurrent erosions, and an opaque, vascularized cornea. Both eyes had AAK graded stage 2 and stage 3. Genetic analysis identified a “large, heterozygous PAX6 gene deletion” that encompassed exons 11 to 15 and exon 9 in the neighboring ELP4 gene.

The left eye underwent 3 glaucoma surgeries (2 cyclophotocoagulations and 1 trabeculotomy) and was enucleated in 2017 due to painful secondary glaucoma, vitreous hemorrhage, and crystalline lens luxation.

Results of Fontana-Masson staining demonstrated intense argentaffin reaction for melanin pigment that was contained within limbal melanocytes, and adjacent LESC in normal control eyes. This was completely absent in the inferior limbus of the eye with aniridia.

In the superior-temporal limbal quadrant, residual palisade structures contained no distinct LESC clusters; rather they had a uniform population of less differentiated cells that continued into the basal layer of the corneal epithelium.

Immunolabeling for Pax6 was seen in the inferior-temporal quadrant in most corneal and limbal epithelial cells in AAK. Cytoplasmic localization of Pax6 was not noted in the control eyes. Ocular surface epithelia in AAK were “completely negative” for corneal epithelial differentiation markers keratin 12 (K12) and K3, but positive for conjunctival differentiation markers K13 and K19.

Desmosome protein expression — including desmocollin-2 and desmoglein-1 — was only seen in the superficial epithelial cells of the cornea and limbus in AAK.

K15, K14, and P-cadherin, all established limbal stem/progenitor cell markers, were expressed in limbal basal epithelial cells in both AAK and control samples. However, in AAK, positively labeled progenitor-like cells were not organized into limbal clusters, rather forming a “continuous multilayered band of undifferentiated basal/suprabasal cells” that extended from the limbus to the corneal surface.

These findings, among others, indicate that undifferentiated cells that exhibit a limbal epithelial cell/progenitor cell phenotype are well preserved in AAK, but not organized in a typical fashion.

In the patient with AAK, the limbal epithelium was infiltrated heavily with CD18-positive immune cells from the stroma, as well as interspersed with Melan A-positive melanocytes, which have been identified as an important “niche cell” population. In AAK, these cells were increased markedly, and displaced from their basal position, as well as expressed reduced Pax6 levels in their nuclei.

Study limitations include the use of a single case description and prolonged glaucoma medication use.

“Genetic and environmental factors (oxidative stress, inflammation) seem to interact in the pathogenesis of AAK, with reduced nuclear Pax6 dosage affecting both normal limbal epithelial differentiation and melanocyte pigmentation and function,” according to the researchers. “[These findings] are fully compatible with previous data from animal models.”

“They further support the concept that AAK is caused by a primary and progredient dysfunction of the limbal stem cell niche, preventing homing and survival of LESC,” the study says. “As a consequence of these findings, any therapeutic approach in aniridia patients should also consider strategies for niche restoration to halt the decline of LESC function.” 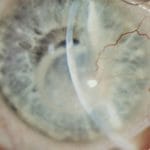