Intraocular pressure (IOP) decompensation after Descemet membrane endothelial keratoplasty (DMEK) can be prevented by positioning patients with an upper body elevation of 30° or greater immediately after surgery until bedtime, according to research published in Cornea.

This prospective, randomized, controlled trial was conducted at the University of Cologne in Germany between 2017 and 2021. Patients (N=40) undergoing DMEK due to Fuchs endothelial corneal dystrophy were randomized to receive immediate postoperative positioning in a supine position (n=20) or with the upper body positioned at a 30° or greater elevation. All patients maintained their positioning until bedtime when all patients had a supine position. IOP was evaluated at 1, 2, and 4 hours after surgery and at 4 time points on postoperative day 2. If IOP increased to more than 30 mm Hg, patients were required to sit upright for 15 minutes. Visual and ophthalmologic outcomes were evaluated at 1 month after surgery.

Pupil block at 3 to 6 hours after surgery was observed among 10.0% (n=2) of the supine cohort with an IOP increase up to 50 mm Hg and 80% gas filling of the anterior chamber. No decompensation events occurred among the elevated group.

After surgery, best spectacle-corrected visual acuity was improved from 0.57 to 0.29 logMAR (P =.002) among the supine group and from 0.48 to 0.22 logMAR (P =.006) among the elevated cohort. Neither pre-surgery (P =.552) or post-surgery (P =.661) visual acuity differed between cohorts. Similarly, corneal thickness decreased significantly from baseline among both cohorts but did not differ between groups.

Overall, there was a 34% rebubbling rate. Rebubbling did not occur among the two patients with IOP decompensation events. Rates of rebubblings were similar among both groups.

The results of this study may not be generalizable for patients undergoing DMEK for other ophthalmologic indications. 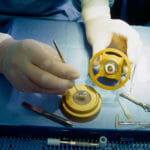