Auricular point acupressure may be an ideal adjunct treatment for postoperative pterygium recovery, according to findings published in Complementary Therapies in Clinical Practice.

Researchers conducted a randomized, controlled study to assess the efficacy of auricular point acupressure treatment during the postoperative recovery period for patients who have undergonepterygium surgery. The study consisted of 60 participants with pterygium who were scheduled for elective outpatient surgery at The First Affiliated Hospital of Zhejiang Chinese Medical University who were randomly assigned to 2 groups. Both groups were treated for 1 week; 1 group underwent treatment using ear acupressure, and the control group was treated using sham auricular therapy. The treatment group’s therapy included the use of cowherb seeds.

The study explains that auricular therapy is a traditional treatment with a 2000-year history in China that has become popular in Europe in the past 60 years, and that this is the first study to assess its efficacy for postoperative recovery from pterygium surgery. This study was conducted because it has been shown that postoperative pain in the pterygium of the eyes seriously affects patient recovery.

Study limitations include a small sample size and a possible placebo effect due to the true and sham auricular therapies performed. 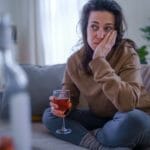