Ophthalmic surgeons are typically cautious about recommending multifocal intraocular lenses (IOLs) for patients who have had previous laser refractive correction because any unpredictable shifts resulting from the new lens may necessitate photorefractive fine-tuning on a thinner cornea. Concurrently, there is still a demand for trifocal IOLs in this set of patients.

Previous research has indicated that those with prior keratorefractive correction who receive bifocal IOLs experience safe and predictable outcomes, and the few papers that explore trifocals have shown more accurate visual results after hyperopic correction. A new multicenter study conducted in Spain evaluates consecutive patients who underwent LASIK or surface ablation/PRK an average of 9.3±3 years before lensectomy and trifocal implant, according to data published in Journal of Cataract & Refractive Surgery.

The retrospective case series examines data from Clinica Baviera’s clinical records system for 868 eyes of 543 patients who received trifocal IOLs from 2012 to 2019. Data included 319 eyes of 215 participants in the myopic group and 549 eyes of 328 patients in the hyperopic and mixed-astigmatism cohort. Visual outcome expressed as corrected distance visual acuity (CDVA) 3 months after IOL implantation was better for those who had myopia (P <.01). In fact, 21% of hyperopic eyes lost more than 1 line of CDVA, compared with 12% of myopic eyes.

Still, patients with myopia obtained less accurate results in mean manifest refraction spherical equivalent (MRSE) -0.38 ±0.30 D, than hyperopic participants -0.17±0.30 D (P <.001). Data shows 63.5% of myopic eyes and 73.5% of hyperopic eyes were within ±0.50 D (P <.01). Post-IOL enhancement with additional corneal ablation was needed by 17% of the myopic cohort and 13% of the hyperopic group (P >.05). After enhancement, 67% of myopic eyes and 79% of hyperopic eyes achieved manifest refraction spherical equivalent within ±0.50 D by the final postoperative visit.

Total postsurgical follow-up time was 15±12 months. At their last appointment, patients with myopia had a myopic shift related to the amount of original laser correction. Participants with high original myopic ablations of -5.00 D or worse had less optimal precision, but similar CDVA outcomes as low adjustments; although high hyperopic corrections of +3.00 D or more reached more accurate results, yet lost more mean lines of CDVA. Nd:YAG laser capsulotomy was required for 13.7% of those with myopia and 21.0% of patients with hyperopia (P <.05), with no significant differences between high and low myopia or hyperopia subsets.

Limitations of the investigation include its retrospective design, and a large group of surgeons using varying excimer lasers. Its strength is that it is one of the largest analyses comparing relationships between refractive surgery with eventual trifocal IOL implantation.

This study supports use of trifocal IOLs for eyes that have had previous low or moderate LASIK or PRK correction. “However, in eyes previously treated with high hyperopic ablation, the risk for vision loss is increased, and another IOL model should be considered,” according to the investigators. 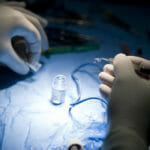