Researchers conducted a single center, retrospective analysis of children aged 1 to14 years who underwent cataract removal and in-bag IOL placement, primary posterior capsulotomy and anterior vitrectomy, or bag-in-lens IOL surgery. All surgeries were performed by a single surgeon under standardized conditions. The study excluded eyes with visually significant ocular comorbidities and severe systemic comorbidities. The main study outcome measures were the rate of survival without VAO that required clearing of the visual axis after cataract surgery with primary IOL implantation and any other surgical complications.

The researchers determined that there were 13 cases of VAO, occurring at an average of 10 months (IQR 10-12) after surgery. VAO occurred in 10 eyes with 1-piece in-bag IOLs, 2 eyes with bag-in-lens IOLs, and 1 eye with a 3-piece in-bag IOL.

The team reported 1 case of endophthalmitis and 2 eyes with bag-in-lens surgery (10%) had an iris capture. They found no cases of postoperative retinal detachment or new glaucoma.

“Children with secondary visual axis opacification that required a procedure to clear the visual axis generally presented within 15 months,” the researchers report. “Further inquiry into the relative merits of single and 3-piece acrylic lenses in this age group is warranted.”

Study limitations include the retrospective design, the limited sample size of patients, postoperative topical corticosteroid treatment was relatively short (2 weeks), the overall median time to VAO may be underestimated because of loss to follow-up, and fewer patients were treated with bag-in-lens surgeries compared with in-bag IOLs.

The bag-in-lens recipients were older and had fewer comorbidities, which may predispose them to more favorable outcomes, researchers note. The VAO rate in-bag lens recipients were driven by only 2 eyes from a single patient. These results are not applicable to children with severe ocular or systemic disabilities. 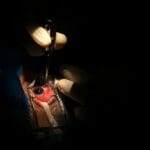