Vascular retinopathies, such as diabetic retinopathy (DR) and retinal vein occlusion are common causes of vision loss and blindness in the US and worldwide. Although DR is the most common retinal vascular disease (RVD), not all RVDs are associated with diabetes. Retinal vascular alteration and damage can be secondary to some primary eye conditions, such as retinal telangiectasia in Coats disease, but more often are associated with systemic diseases.1 The alteration of the retinal vascular can develop from those conditions that affect retinal vessels anatomically (e.g., diabetes, hypertension and lipid disorders), as well as those that alter hemodynamics and blood chemistry.

In many cases, the diagnosis is made based on the patient’s medical history. For example, a patient with uncontrolled systemic hypertension may present with a classic retinal vein occlusion. Patients often have multiple comorbidities which can make it difficult for the clinician to determine the underlying systemic etiology of the patient’s vision loss. It is easy for the clinician to erroneously attribute disease to a common condition, such as diabetes, but this can result in failure to detect or treat a coexisting condition, which may result in morbidity or mortality to the patient.

Here, Ophthalmology Advisor provides a series of different images of nondiabetic vascular retinopathies using a variety of imaging technologies, and explanations of how to use them to develop a diagnosis. Relevant information from each case can be found below.

Figure 3 shows a 47-year-old Black woman who was previously treated for PDR, who presented with symptoms of “seeing floaters.” An examination revealed progressive retinopathy with large, deep intraretinal hemorrhages. The patient had not seen her primary care physician. After additional workup, a complete blood count revealed severe anemia which required systemic intervention. The patient was also treated with intravitreal anti-VEGF therapy, which resulted in rapid resolution of the retinal and vitreous hemorrhage.

A study reported the prevalence of anemia in diabetic patients as 12.3%.4 Anemia results in decreased oxygen binding capacity reaching peripheral tissues, including the retina. Capillary nonperfusion is often seen on fluorescein angiogram.5 Severe anemia can present with retinopathy, mimicking that of diabetes or retinal vein occlusion. Distinguishing clinical features of anemia include retinal hemorrhages that are larger and located in the deep vascular plexus. These hemorrhages can have areas of whitening centrally, known as Roth spots. In many cases the systemic etiology is also found after discovering the retinopathy. The clinician must communicate with their primary care physician to identify the cause of anemia. Anemia can be seen in the setting of nutritional deficiency (i.e., iron, folate, B12), chronic disease (i.e., malignancy, autoimmune disease, renal failure), or hematologic malignancy. Patients should undergo evaluation by their PCP to rule out the presence of gastrointestinal bleed or uterine bleeding. A less common form of anemia is autoimmune hemolytic anemia. Figure 4 shows a case of cold agglutinin hemolytic anemia. In this condition autoantibodies bind to and destroy red blood cells at low temperatures via the complement cascade.6,7

Figures 5, 6, and 7 show cases of leukemic retinopathy. Patients with leukemia can present with intraretinal hemorrhages, white centered retinal hemorrhages, and cotton wool spots.8 Other ocular findings include dilation and tortuosity of retinal veins, microaneurysms, and optic nerve infiltration. Many subtypes of leukemia exist, and are distinguished based on which type of cell line is affected. These include chronic lymphocytic leukemia (CLL), acute lymphocytic leukemia (ALL), chronic myeloid leukemia (CML), acute myeloid leukemia (AML) and others. The presence of intraretinal hemorrhages in acute leukemias is strongly associated with the presence of thrombocytopenia.8 Proliferative disease has been described as the presence of neovascularization or fibrovascular proliferation along with capillary dropout.9,10 In contrast to neovascularization seen in PDR, neovascularization in leukemic retinopathy is often in the mid to far periphery, similar to that seen in sickle cell retinopathy.9,10 These can result in vision loss due to vitreous or subhyaloid hemorrhage and tractional retinal detachment. Researchers believe the pathophysiology is secondary to vascular occlusion, and blood hyperviscosity, resulting in tissue hypoxia.

The patient in Figure 9 had a previous diagnosis of diabetic retinopathy. The patient presented with new onset decreased vision secondary to subhyaloid hemorrhage. An additional examination revealed preretinal, intraretinal, and subretinal hemorrhages. Further lab workup led to diagnosis of idiopathic thrombocytopenic purpura. It is thought that retinopathy is uncommon with thrombocytopenia alone; when the platelet count drops below 3000 per microliter and hemoglobin is less than 8 mg/dL, the prevalence of retinal hemorrhages increases to 70%.11, 12

Figure 10 shows a patient with systemic lupus erythematosus (SLE). Fundus findings such as hemorrhages, vasculitis, cotton wool spots and hard exudates have been reported in 10% of patients with SLE.13 Proliferative disease with presence of neovascularization has also been described.14 The degree of retinopathy correlates with degree of systemic activity and renal involvement.13,15 The pathophysiology is due to complement activation leading to immune complex deposition and antibody mediated endothelial damage.16

Figure 11 shows a patient with Sarcoidosis. Sarcoidosis is an idiopathic granulomatous disease involving one or multiple organ systems.17 The lungs are more commonly involved with presence of hilar lymphadenopathy seen on chest x-ray. The most common extrapulmonary organs affected are the lymph nodes, eyes, and skin.18 The hallmark histologic finding is a non-caseating granuloma. The etiology of sarcoidosis is not fully understood. Uveitis is a frequent and early feature of sarcoidosis. Posterior findings in sarcoidosis more commonly involve periphlebitis, macular edema, and papilledema, but other findings include chorioretinitis, chorioretinal granulomas, and optic nerve granulomas.19 Perivenous exudates, referred to as “candle wax drippings,” can also be seen.18 Proliferative retinopathy has been reported with the retinal neovascularization, optic neovascularization or iris neovascularization. All cases were associated with peripheral capillary nonperfusion.20

Figures 12 and 13 show cases of ocular ischemic syndrome (OIS). This condition is secondary to carotid artery stenosis or occlusion which causes ocular hypoperfusion, resulting in vascular retinopathy. Most commonly carotid stenosis or occlusion is secondary to atherosclerosis. Perfusion pressure of the central retinal artery is reduced and often there is poor collateral circulation between the internal and external carotid arteries. A reversal of blood flow in the arterial system can be seen.21 Posterior segment findings include retinal arteriole narrowing, retinal hemorrhages, microaneurysms, capillary telangiectasias, cotton wool spots, cherry red spot, and neovascularization.22 Retinal veins are often dilated without tortuosity, a finding which distinguishes it from retinal vein occlusion, in which retinal veins are both dilated and tortuous. The pathophysiologic basis for this may be that in OIS there is compromised inflow, whereas in retinal vein occlusion, there is compromised outflow.22 Retinal hemorrhages are often deep and located in the midperiphery and occasionally in the posterior pole.

Lipid disorders such as hypertriglyceridemia can also cause retinal vascular alterations that may be mistaken for those associated with diabetic retinopathy. Figure 14 shows a patient with proliferative DR who also displays a transient case of lipemia retinalis.

Macular telangiectasia (mac tel) types 1 and 2 can be mistaken for DME when the patient has a history of diabetes. Examples are seen in Figures 15 and 16. Mac tel type 2, also known as idiopathic perifoveal telangiectasis, is a bilateral retinal neurodegenerative condition, in which the perifoveal capillaries become dilated and may show leakage on fluorescein angiography. In type 2, exudates are absent, unlike in type 1, which is usually unilateral and a developmental anomaly similar to Coats disease. Mac tel also results in neurogenerative alteration of the outer retinal segments, but it is the capillary alteration that can mimic DME.

Vascular retinopathies may have one or more underlying etiologies. While they are commonly associated with diabetes, these similar clinical presentations may result in diagnostic challenges. A diagnostic conundrum is created when the patient has a history of diabetes as well as other known or unknown conditions that might be the cause of the retinal findings. By careful assessment of the patient’s history and observation of various nuances, a more accurate diagnosis can be made, reducing further chance morbidity and even mortality.

Next hm-slideshow in Retina & Vitreous 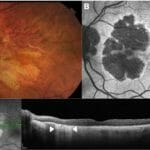 Geographic Atrophy Treatments In The Pipeline for 2022