Evaluations using rapid picture naming and level of low-contrast letter acuity distinguished patients with mild cognitive impairment (MCI) due to Alzheimer disease from patients who were aging normally in a study that researchers presented at the North American Neuro-Ophthalmology Society 2021 Annual Meeting.

Rapid automatized naming (RAN) tests have had some success in detecting mild cognitive impairment, the report explains. The researchers sought to evaluate the utility of new RAN tests and measures of visual pathway structure and function for identifying Alzheimer disease. While the disease is often diagnosed in the dementia stage after clinical symptoms present, biomarkers can precede them during the prodromal phase of MCI. They also assessed whether the tests correlated with vision-specific quality of life scores, which can also be used in disease detection.

In the cross-sectional, case-control study, 14 participants with MCI due to AD and 16 controls with normal cognition underwent several tests. Each group had an average age of approximately 75 years with an average of 17 years of education and roughly 20/20 corrected vision.

“In this pilot study, rapid picture naming and low-contrast letter acuity are sensitive measures that distinguish mild cognitive impairment due to Alzheimer disease from those with normal aging. …. These easily-administered tests are promising for identifying patients at risk for AD dementia and serving as measures in disease-modifying therapy clinical trials,” according to the researchers. 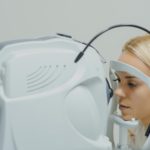