Idiopathic corneal warpage has not been previously described, but a study presented at the American Society of Cataract and Refractive Surgery (ASCRS) 2021 meeting in Las Vegas, held July 23 to 27, suggests it can be a differential diagnosis when inferior steepening is noted on corneal topography.

Patients presented with focal inferior topographic steepening. Six of these eyes had no history of contact lens wear; 2 had not worn contacts for at least 3 months. And 2 eyes had undergone previous LASIK.

Investigators ruled out keratoconus and post-LASIK ectasia due to a lack of focal corneal thinning, posterior elevation, and compensatory epithelial thinning at the location of focal steepening. Rather, the steepening was associated with the “focal epithelial thickening that would be expected of corneal warpage.”

“These cases represent a previously undescribed entity: idiopathic corneal warpage,” the study says. “Topography and OCT are synergistic tools in differentiating warpage from ectasia, both of which could present with inferior steepening.” 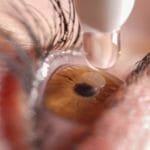