Self-reports of taste impairment among patients with long-haul COVID-19 infection were overestimated, according to findings from a research letter published in JAMA Otolaryngology.

Between March and July 2021, investigators screened all patients referred to the outpatient clinic of Trieste University Hospital in Italy for postCOVID-19 chemosensory disorders. Eligible patients included those who were aged 18 years and older, had reverse transcription polymerase chain reaction (RT-PCR)-confirmed SARS-CoV-2 infection, had self-reported an altered sense of taste more than 3 months after the acute phase of COVID-19 infection, and had undergone psychophysical evaluation, including orthonasal and retronasal olfactory testing and gustatory assessment.

On analysis of TSS, the investigators found that the prevalence of hypogeusia was 41.9%, which decreased to 28.6% after stratification by patient age. Of note, only 3 (2.9%) patients had confirmed hypogeusia and were normosmic on psychophysical evaluation. The investigators noted that as TDI increased, the prevalence of patients who were normogeusic also increased. Of 61 patients who were found to be normogeusic on psychophysical evaluation, 51 (83.6%) had a TDI score of less than 30.75, 16 (26.2%) had a retronasal score of less than 12, and 10 (16.4%) had both normal orthonasal and retronasal olfactory function.

Study limitations included a lack of testing during the acute phase of COVID-19, that patients were tested at different timepoints and in the absence of an age-matched control group. The investigators noted that, “…questions on taste function are not validated tools and can be misleading.” False-negatives may result from the use of a single sensory technique to assess taste function. Dysgeusia, phantogeusia, parosmia, and phantosmia were not addressed in this study, thus results may not be generalizable to other patient populations.

According to the investigators, “…this psychophysical study uncovers overestimation of self-reported taste impairment and supports the use of validated psychophysical tests to estimate the burden of chemosensory dysfunction in people with long-[haul] COVID-19.”

Disclosure: One author declared affiliations with biotech, pharmaceutical, and/or device companies. Please see the original reference for a full list of disclosures. 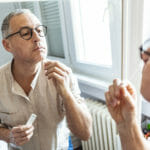